With lockdown easing, the great escape of KHS members to Wales went better than anyone could have hoped  not a single garden had to be visited in the rain, some were even sunny  and they were all lovely in their different ways.

Probably the best known was the Botanic Garden of Wales, which boasts a glasshouse with a record-breaking roof span, situated like a gigantic contact lens on its grassy mound, with panes that open and shut by scientific magic as required. The climate is temperate (much appreciated by resident birds whose songs were magnified by the dome overhead), and bold displays of Australian kangaroo paws and South African daisies are interspersed with rarer and endangered species. Better still for the old-fashioned was the walled garden, with a layout modelled on the very earliest botanic gardens, like Padua. The main access path of the garden was also lined with flowerbeds and water features, and beyond lay the landscape of an earlier Georgian garden, with Paxtons Tower high on a distant hill (but that is another story). 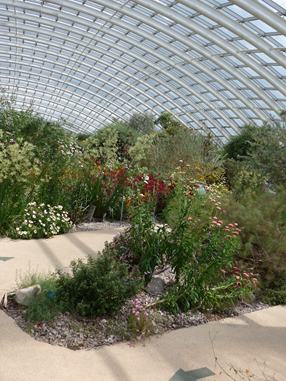 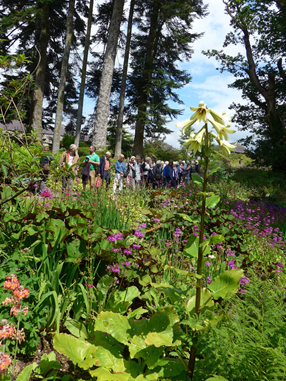 That same day we visited Aberglasny, also deservedly well-known and televised. The garden was developed around the restoration of a late-medieval garden of the Bishop of St Davids, where the central cloister garden has been excavated and laid out with grass beds (best in spring because bulbs are planted in the grass). The pattern of the beds can be viewed from a walkway on the surrounding walls, as can the adjoining, much flowerier, garden designed by Penelope Hobhouse and extended by Joseph, the present head gardener (ex-Kew of course). And this is the moment to praise our guide, Tony Russell, and all the owners and head gardeners who shared their enthusiastic love of plants, and humorously admitted to the challenges of growing them. Josephs career, before he took over at Aberglasny, included plant-hunting in China, and his favourite exotics flourish in their Welsh environment, especially in the bog garden with its rainbow of primulas clustered around Giant Himalayan lilies, gunnera, and beautiful acers. 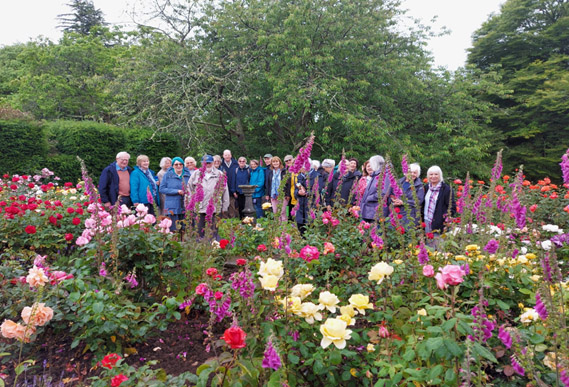 From a bishops palace to thirteenth-century castles (presumably once Anglo-Norman to hold the Welsh in check, but that part of their history was glossed over). Picton Castle had the most breath-taking walled garden of all, with rose-laden flowerbeds interspersed with brighter plantings of blue and orange flowers (much subtler than it sounds). The extensive walls, once angled to ripen fruit in the sun, have now aged into all shades of terracotta and cream, and are used to coax tender exotics including palms, bottlebrushes and a unique species rose to thrive, as if they really were in an oriental climate - and here the head gardener, Roddy, gave account of his experimental gardening that was both enthralling and self-deprecating. 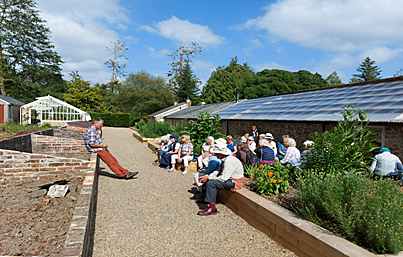 The parkland area of Picton Castle has a collection of fine old trees and shrubs (and a maze), but the finest arboretum is at Upton Castle, where we were guided down through glades of weeping beeches. Some trees are centuries old and have attained the status of champion trees after being rescued and nurtured by the present owners. 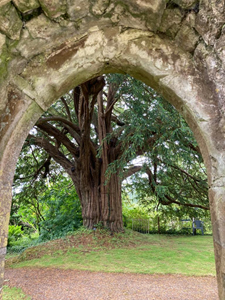 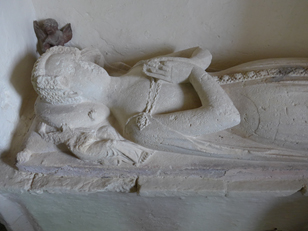 Upton also has a walled rose garden where sweetly perfumed old varieties stand with their backs to the wall facing a bright display of modern hybrids. But for medievalists Upton offered a further treat that was not horticultural  a tiny chapel with poppyheads carved on the pews and tomb effigies of two knights and a lady, with every detail of their costumes preserved in stone. 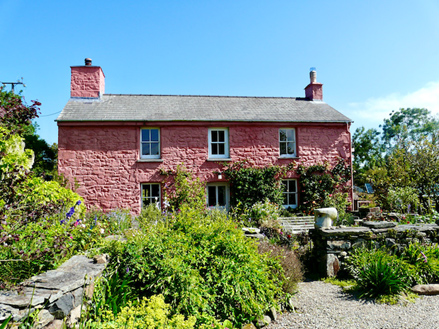 Despite the romance of history, two other gardens that were created from scratch by their present owners were, for some of us, the most magical we saw. First Dyffryn Fernant, where Christina Shand moved into a rose-coloured cottage in 1996, and started her planting inside the garden gate in the beguiling tradition of haphazard cottage gardens. She then proceeded against all the odds to make spaces  a kitchen garden; a Magic Garden for viewing the Preseli Hills (first home of Stonehenge); a formal but lusciously planted garden centring on a huge oil jar; an area of gently waving grasses cut into squares; a bog garden; and, beyond all that, the meadowland full of birdsong leading down to the stream and pond.

The second very individualistic garden was Llwyngarreg, begun in 2000 by Liz and Paul ONeill, who bought it as a farm and controlled its watery nature to make a habitat for meconopsis, irises, primulas, magnolias and a long list more which, as with all the other gardens, would fill many pages. Paul retains the skills of a teacher who can hold a class in thrall and thus he guided us round his horticultural treasury, over the bridges he has made and past his living willow structures. 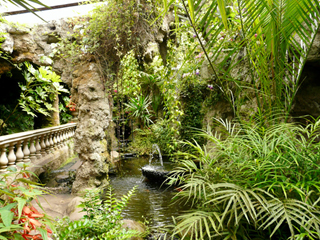 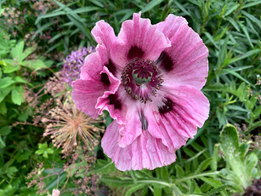 These three full-on days of garden visiting (and plant-buying) were sandwiched between the journeys to and from Pembrokeshire  both of which were relieved by a visit to a garden nearer the Welsh border. Singleton Botanic Garden near Swansea still retains its original charm as an Edwardian estate (with a Swiss chalet transported and installed in the park), but the present flowerbeds are a tribute to the local councils commitment to keeping it as a public park and botanical showpiece. There are fine herbaceous borders and idiosyncratic order beds (the two best containing delphiniums and a show-stopping display of cacti and succulents). Last but not least, on the way home, Dewstow near Chepstow gave us hidden gardens and grottoes  yet one more different experience, this time groping through dark, damp tunnels to emerge into a vision of greenery and bright flowers. And here was the finest of several excellent ferneries, including Aberglasny and Picton Castle. Mentioning them as if they were an afterthought is wrong, but it helps to emphasise how there was almost too much to take in, because it was such a feast.

The Societys stall at Kew Village Market on 6 June was very popular with lots of geraniums, coleus, begonias and fuchsias sold. Thank you to everyone who supported us and a warm welcome to all the new members who joined on the day. 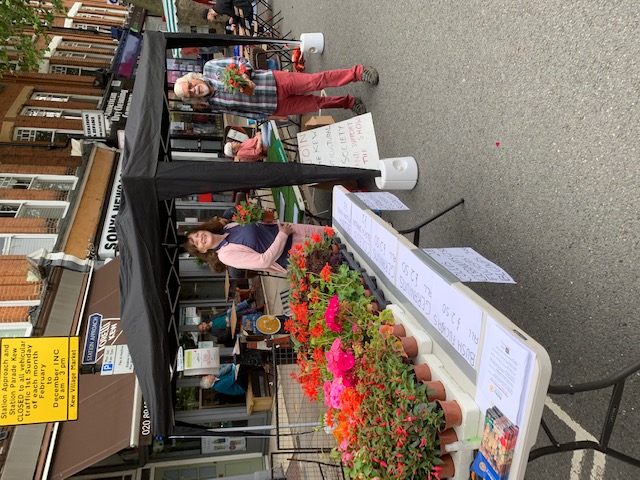 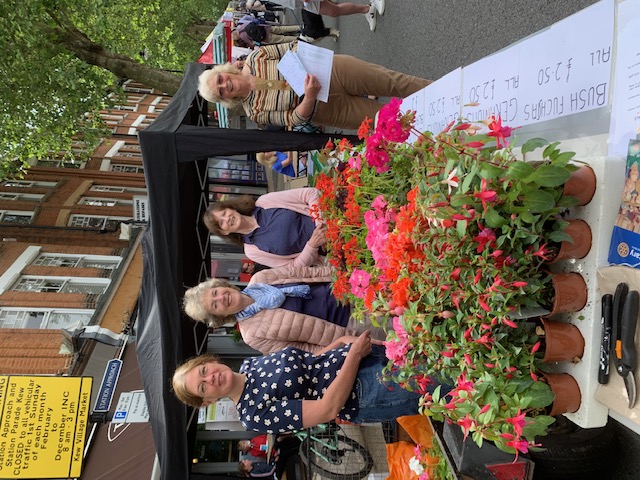 Gifts from the Kew Horticultural Society

At a recent Special General Meeting the members of the Kew Horticultural Society agreed to give some of their excess reserves to local community groups and schools with the aim of furthering interest in gardening, horticultural and earth science generally. Accordingly, with this aim in mind, the KHS is happy to announce that they have made the following gifts.

The KHS donated £3000 to the Royal Botanic Gardens, Kew for a community project which aims to encourage excluded people, such as those who are homeless or refugees or suffer from disabilities, to engage in gardening and to learn about gardening in the allotments located at Kew Gardens. The KHS gift will support the provision of a new poly tunnel as well as tools and equipment for this project.

£3000 was also given to the Chiswick House and Gardens Trust for their Schools Project. The kitchen garden has for some time invited school children to enjoy day visits to the kitchen garden to plant, grow and harvest produce, visit the bee hives and learn more about the world that is the kitchen garden. The KHS monies will allow the children to visit for free, as used to be the case, rather than as at present paying to visit. Payment had to be instituted given the ending of an earlier grant. Given the shortage of funds in schools the need to pay had led to a steep decline in school visits. The KHS grant reverses that disappointing trend. The monies will allow the school children to visit without charge and to provide the tools and equipment needed to make sure the project is a success.

Visitors in the Kitchen Garden

Finally, three local schools, Kew Riverside Primary School, The Queens C of E Primary School and Darell Primary and Nursery School, each received a grant of £1000 to enable them to carry forward proposals, which each of them submitted prior to being given the grant, for an earth sciences project. We were delighted that the proposals were all very different but that each was clearly going to offer the children real opportunities to understand better the natural world and to get engaged in activities involving both gardening and nature study.

At the 2018 Summer Show there was a childrens competition for the longest bean. Earlier in the year the KHS held a stall at the Kew Market where they handed out bean seeds, pots and growing medium to encourage children to grow beans and then enter them in the Summer show. The winner was Harry Long. 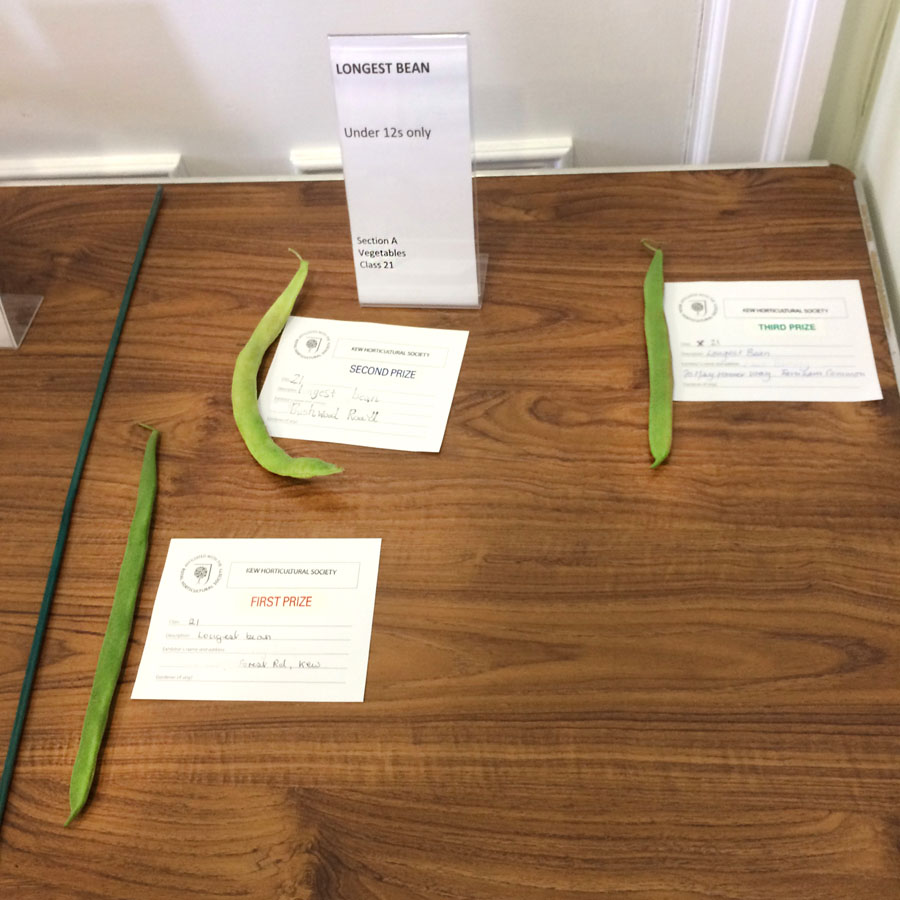 On the morning of 21 July 2018 two KHS members kindly invited 10 children plus their carers/parents to visit their allotment. Everyone arrived amid bright sunshine and fluttering butterflies. There were activities and events designed to introduce children and some of their parents too, to growing fruit and vegetables and to the importance of plants in daily life. The children planted seeds, identified fruit and vegetables and insects. They helped with digging, weeding, carrot pulling and also built a scarecrow. After all of that fun everyone had cake and juice. A good day out. 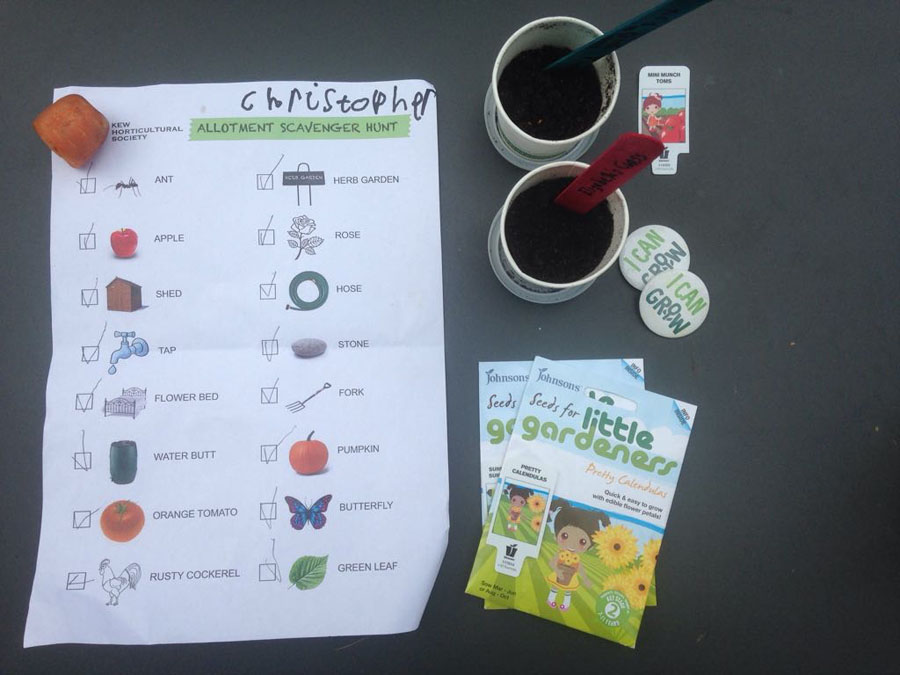 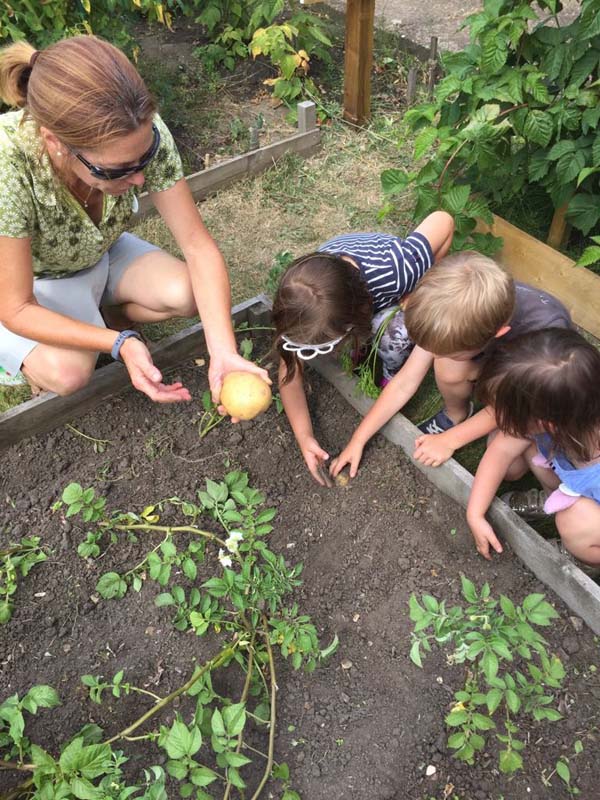 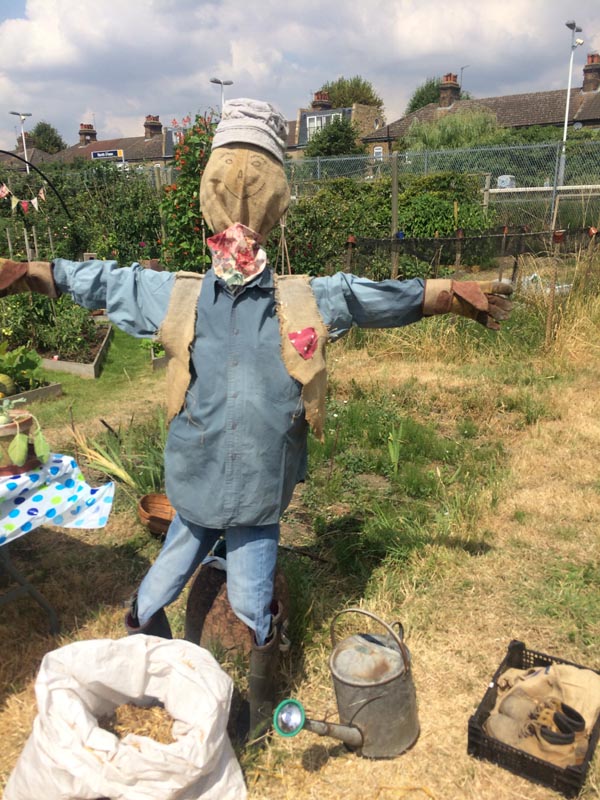